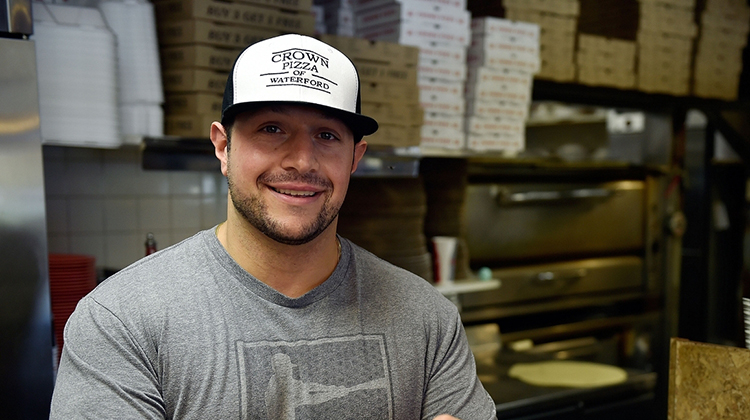 Waterford — Taso Vitsas has been a fan of Rajai Davis since meeting him as a baseball player trying out for the University of Connecticut at Avery Point team.

And Davis, now a key member of the Cleveland Indians team that is one game away from winning the World Series, has been a fan of the Vitsas family’s Crown Pizza on Boston Post Road for almost as long, his favorite dish being the taco pizza.

The two are friends, and during the offseason Davis, who grew up in New London and has a home in East Lyme, is a regular at the Greek-style pizza restaurant.

“He’s just such a captivating guy,” said Vitsas, a New York Mets fan during the regular season. “He hasn’t changed from then to now.”

So when Vitsas had a gut feeling about three weeks ago that it was going to be the Indians vs. the Chicago Cubs in the World Series, he asked Davis about the possibility of cheering him on at Wrigley Field. A day later, he got a message back asking which game he wanted to attend.

That’s when Vitsas got the brainstorm to give Davis a black-and-white Crown Pizza ballcap with his number 20 on the back, a memento that made it into the spotlight on national television Saturday when the hat appeared on the Indians bench next to ace reliever Andrew Miller.

Hartford-based Fox 61 Television eventually got in on the act, wondering how a ballcap from Connecticut had landed in a World Series dugout nearly 1,000 miles away in Chicago. The answer: Vitsas had handed the cap to Davis from the stands, and the outfielder had somehow arranged for it to be propped up on the bench so the Crown Pizza of Waterford lettering was visible to a TV audience of millions.

“It’s unreal; it’s what it should be — a local guy remembers where he came from,” said Steve Pirelli, a regional manager for Coca-Cola Bottling Co. of Southeastern New England who ate Monday at Crown Pizza and stopped by to shake Vitsas’ hand.

But Vitsas, sitting Saturday behind home plate with his wife Ourania along with a group of Indians friends and family, had no idea his cap had made it into the national spotlight. It was only while heading back from the game, a 7-2 Indians victory, that about 30 missed calls and 20 to 30 texts alerted him to what had happened, he said.

“I said to my wife, ‘I can’t believe this,'” Vitsas said. “We looked at each other and we just started laughing.”

Then the momentum picked up as Fox 61 did its story, and people started posting the picture of Miller next to the Crown Pizza hat on Facebook. As the story gained traction, Vitsas texted Davis Monday to make sure his friend felt comfortable with him talking about what happened.

“Just make sure to let them know the taco pizza is my favorite,” he recalled Davis texting back.

The pizza, one that Vitsas added to the menu himself, includes taco meat, sour cream, lettuce and crumbled up potato chips (along with jalapeno peppers and olives that Davis leaves off).

The publicity comes at a fortuitous time, since the 28-year-old restaurant started by Vitsas’ mother and father, Leo and Tina, is undergoing renovations that will double its size. Vitsas estimated the newly refurbished 3,000-square-foot space will open in the next six to eight weeks, focusing on the same large portions and low prices that have distinguished the family restaurant where his sister, Zaffy, also works.

Vitsas said he usually shuns the spotlight, but he’s happy that his friend Rajai Davis has been flourishing in it, with three stolen bases and two hits in game five of the World Series. He marvels at Davis leading the American League in stolen bases at the age of 36.

Not coincidentally, the Crown Pizza hat that Davis helped make famous hasn’t been doing badly, either, to the point that Vitsas is considering a significantly larger order of the caps next time around.

“They’re just flying off the shelf,” he smiled.