Crown Pizza in Waterford Hits It Out of the Park 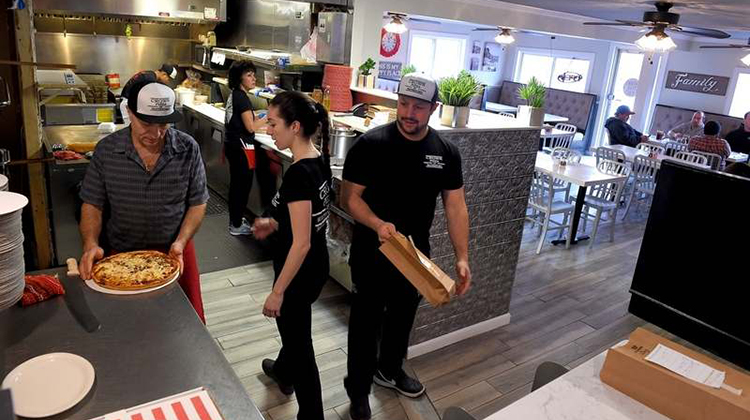 Waterford — Crown Pizza, in the spotlight last fall when a ball cap with the restaurant’s logo appeared on national television during the World Series, has managed a complete transformation of both its dining area and kitchen over the past few months.

The renovations have doubled the size of the Greek-style, family-owned pizza restaurant. The 3,000-square-foot eatery enjoyed a surge of popularity after Rajai Davis, then a star for the Cleveland Indians, placed a black-and-white Crown Pizza ball cap on the team’s bench in a spot that garnered attention on television and mentions in newspapers around the state.

“It’s just been great,” said Taso Vitsas, son of Crown Pizza’s founders, who befriended Davis at the University of Connecticut at Avery Point, where the New London native played baseball. “It’s a good feeling after all these years of hard work.”

Davis, an East Lyme resident who rigorously works out in the off-season, said he and the outgoing Vitsas met at the Avery Point gym and became fast friends. It wasn’t long before Davis became a regular at Crown Pizza, where he became hooked on the taco pizza.

“Everyone gets a cheat day,” Davis smiled.

Vitsas got tickets from Davis to one of the World Series games in Chicago, then had the brainstorm to give the center fielder a Crown Pizza ball cap with his number 20 on the back. The hat became the subject of speculation when it appeared on the Indians’ bench next to ace reliever Andrew Miller as the Fox Sports Network focused its cameras on the lanky lefty.

The momentum from the Crown Pizza story being posted on social media eventually landed the ball cap image all around the globe. Vitsas said he has sold more than 1,000 Crown Pizza ball caps since the World Series, and business is better than ever.

“We’ve always had a steady business,” he said. “But this year it’s almost been summer throughout the winter.”

Renovations were made possible when the owner of Nick’s Package Store next door decided to retire. Plans for the makeover started to take shape last September and were completed about a month ago, necessitating several new hires among wait staff and kitchen help.

New pizza ovens, ceramic tile flooring that looks like wood, an expansion in the back to give more room for food preparation and a welcoming front entrance with comfortable seating for those needing to wait were just some of the more noticeable changes. The restaurant, opened 29 years ago and still run by Vitsas’ parents, Leo and Tina, closed for only one day during the renovations.

The white and gray color scheme was chosen by Vitsas’ sister Zaffy to give a warm, Cape Cod feel to the restaurant. The restaurant has only 15 extra seats but feels much roomier and far more comfortable with booths along the side walls and two flat-screen televisions.

Photos of the small Greek island of Samothraki, where Vitsas’ mother and father grew up, dot the renovated restaurant, along with signs made by Zaffy with phrases such as “This Is My Happy Place” and “Family.” Another Zaffy touch is a lighted sign that reads “Like Us on Facebook.”

“We look at everyone as family in here,” Taso said. “It’s one thing to say it, but we really believe it. We would do everything for the customer so they could be more comfortable.”

The restaurant will hold its grand re-opening from 11 a.m. to 9:30 p.m. Sunday, with a variety of free beverages and food available to customers. Davis might show up, Vitsas said, though there is no guarantee.

Vitsas noted that the renovations were planned well before Davis made Crown Pizza famous, but he said the timing of the publicity couldn’t be better.

“It gave us more of a confidence that everything is going to be OK,” Vitsas said.